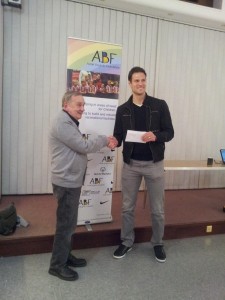 Last Thursday evening, March 21st, Asmir was the welcomed guest of the Mow Cop Players Theatrical and Drama Group where he gratefully received a cheque donated from funds raised to support the Asmir Begovic Foundation. The evening proved to be a great success and everyone enjoyed meeting Asmir. They will continue to support the Asmir Begovic Foundation as one of their nominated charities, which is great news and is accepted with thanks.

The Mow Cop Players were formed in 1974 by their chairman Cyril Bennett and they currently have a membership of over 40 children and 20 adults. Over the years they have performed very successful pantomimes, plays and comedies and their group is self funding as they do not charge for membership. They produce and perform approximately 3 shows per year, one adult, one youth and one pantomime. Their successful shows to date have been a mixture of comedy and drama. They actively encourage the children to progress from acting to directing, and the youth group showcase their talents in their annual musical. The adults have enjoyed comedies and dramas, and have performed in a variety of plays, from wartime musicals to dramas. They also have a Mow Cop Charity fundraising committee – Team Mow Cop – which was brought about when they lost one of their members to pancreatic cancer in 2011. They have currently raised over £24,000 for this charity